Newsday Tuesday—Max: He Did it His Way 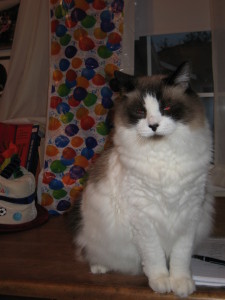 Max is Gone. I knew his energy, his strength, and his very sense of awareness was diminishing. I was pretty sure he was suffering some pain, but I didn’t know how much until I saw him at peace—finally at peace.

One thing that didn’t diminish as he aged was his craving to be near me and to be scratched behind the ears. In his last years, the big wooly guy never turned down an opportunity to be in my lap. The empty space on my desktop this morning, where Max joined me daily, seems as vast as the empty spot he left in my heart. He never was one to curl up in a cat bed in front of the fireplace, like our two little girl kitties do. So I provided a large folded towel on my desk where he could sprawl that big body out and watch me, watch the birds through the window, and, as he did so much in his last years, sleep. Of course, he preferred snoozing on whatever paperwork I was involved in that day.

He could no longer get up on my desk by himself, so we bought pet stairs. They petrified him. He did trust their cat tree, however, so I laid it down for him to use as a step-up to my desk.

Max never lost his sense of humor it was sometimes annoying. He enjoyed knocking my

pen off the desk. I swear, he’d do it on purpose—with purpose. When it didn’t hit the floor and ruin the tip, it landed in the nearby trash basket. He reminded me of an ornery little boy who liked to pull pranks.

As I mentioned in earlier posts, Max never shed all of his feral roots. For years, something as simple as a sneeze would terrorize Max. If he was on my lap and I sneezed, he’d fly off my lap and look back at me with terror in his eyes. He was a wreck when I had a cold. As he matured, he settled down a little about sneezes. He’d only flinch when he’d hear one coming on. Finally, in his later years, he could take a sneeze in his stride. Progress.

I believe there were a couple of things that contributed to Max’s fairly long life. I mean, his stress level was over-the-top. I thought for sure he’d have a heart attack before he reached his teens. But he kept on keeping on. One reason he enjoyed relative longevity was, of course, the fact that we brought him inside to live. He was a totally inside cat. Also, when he was around 13, one of our younger cats was diagnosed with kidney disease and we had Max tested, too, because it’s generally a disease you find in aging cats. His numbers were slightly elevated and we put him on the same diet the vet prescribed for the younger cat. That probably gave him a few—maybe several—extra years of relative health. 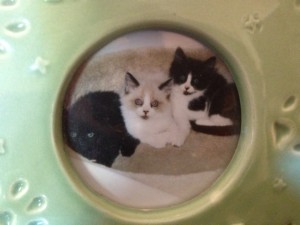 Max was the most challenging cat we’ve ever adopted. We made a lot of concessions around here because of him—removing all area rugs, most of the carpeting in the house, etc. I’m finding that the more concessions you make for a cat, the more difficult it is to find your center—return to what was normal for you before the cat interrupted the flow of things. And, as one wise pet owner told me yesterday, the more challenging the pet—the more you’ve been through together—the harder it is to let go.

I took step one yesterday, though. I bought a bath mat for my bathroom.