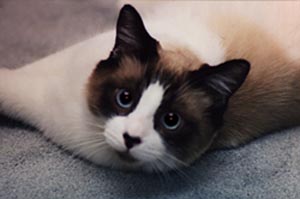 Friday, I introduced you to Max and we talked about his beginnings and his destiny—that is, if we hadn’t jumped in to change it. So how did life go for Max? I have to say, the ride has had its ups and downs.

Max was an adora-dorable kitten with a huge personality and a great sense of humor. There are two things that stick in my mind and still make me laugh when I remember them. Max loved to bat things under the refrigerator where he absolutely couldn’t get to them. He’d wait patiently until I’d come along, then he’d turn in place rather excitedly and maybe mew, to let me know he’d lost a toy, or a bottle cap, or something equally small under the fridge. So I’d grab my 18 inch ruler, get down on my belly and dig it out for him. The funny part was the way he’d get down on his belly right next to me—sometimes cheek-to-cheek—and peer at the toy alongside me, eager to see it appear so he could resume his play.

Every evening we’d play catch. When he’d see me start to head for bed, he’d jump up on 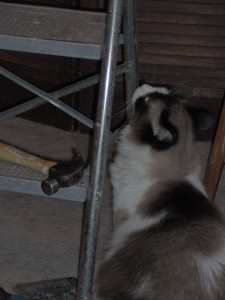 his cat tree and dance around hoping for a game before bedtime. I’d find his red fuzzy ball and toss it to him. Doggone, if he wouldn’t bat it right back to me. Back and forth we’d go for several minutes. On evenings when I was too tired to play, I’d play anyway. I couldn’t resist his enthusiasm. And I’d always end up laughing at his antics and feeling so glad that I’d accepted his charming invitation.

As Max got older, he became shy and started hiding under the bed when we’d have company. You see, at the time, we had two other cats—Winfield, the friendliest cat ever. He loved people and usually sent our guests home with some of his lush white fur on their clothes and a smile on their face. He was a sweet boy. We also had Katy, a gorgeous Himalayan—my precious Katy. I bought her at a pet store, before I knew any better. Obviously, she’d been raised in a kitten mill and she had a problem with strangers. So Max had two role models. He could have copied Winfield and become a friendly cat, but he chose to follow Katy’s lead, instead. Visitors who wanted to greet Max, had to do so under the bed.

His favorite hiding place in recent years is under the bedspread in the bed. He feels safe there. Even when small children are in the room, or we’re running the vacuum cleaner in there, he remains a relaxed lump in the bed. 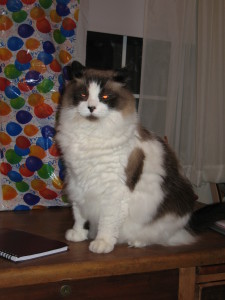 There was another problem with Max from the get-go. He never did “get” the concept of the litterbox and this has been a life-long challenge. We read every book and article on the topic, consulted several veterinarians, scoured the Internet for answers and help. I hired a cat psychic, bought pheromone sprays and plug-ins, tried every kind of litter and box placement. Finally a vet I met in passing suggested an empty litter box. That’s when I started using newspaper laid out flat as well as pee pads in the spots where he preferred going. We’ve also removed the majority of the carpeting from our home and we gave up using throw rugs or bathmats. Anything’s fair game for Max.

Thankfully, the two female cats we currently have in addition to Max have never followed in his paw-prints in that regard. They both have impeccable hygiene.

Fast-forward to 2016. Max is 17 years old, which is probably the high-eighties in people years. He’s a lap-sitter. Loves being in my lap. He seems to have dementia. Has he forgotten that he’s afraid to be in the same room with visitors or is he just too weary to go hide? He’s not a scrawny old guy; he’s actually overweight—weighing in at a hefty17 pounds.

Now we’re in his twilight years and we see changes occurring daily. Tomorrow, I’d like to share some of my thoughts, observations, and facts about the aging cat.