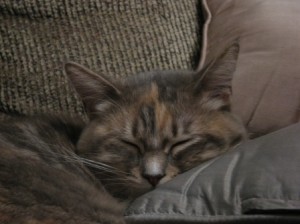 Do all cats purr? I don’t have to look this one up. I have a cat who didn’t purr until fairly recently. Lily is as sweet and cuddly as cats come. Yet, for her first 5 years, I heard nary a purr from her—until a few months ago. She was busy making bread in my lap one morning when I heard a tiny crackle sound. It was labored and faint, but it was the beginning of a purr. Now she can maintain a sustained purr. It’s soft and it is fleeting, but it is a purr—music to my ears.

I’ve read where kittens learn to purr from the mother cat. I guess that if the mother cat lives on the streets and is constantly in fear for her life and those of her kittens, she might not purr and bring attention to herself. Thus, the kittens would not learn how to use their purr mechanisms.

Evidently no one has figured out how cats purr—how the mechanism actually works. They know that cats purr when they’re content, but they also purr when they’re under stress. I think most of us who love accommodating a cat on our laps, love hearing the gentle murmur of a kitten’s purr.

Where’s the Next Klepto Cat Mystery?

Readers are asking me, “Where’s Book 9?” And, “When’s the next print book coming out?” Okay, okay, we’re working on Book 9 as we speak—Mansion of Meows. Can’t wait to share it with you. And the fifth book in the series, The Colony Cat Caper—one of my faves—is being formatted for print now, too. As you can tell, there’s a lot going on in the Matilija Press offices where the Klepto Cat Mystery series is created.

In the meantime, have you read all 8 books in the series? Catnapped, Cat-Eye Witness, Sleight of Paw, Undercover Cat, The Colony Cat Caper, Celebrity Cat Caper, The Corral Cat Caper, and The Gallery Cat Caper? They’re all formatted for Kindle and available at Amazon. The first four are in print. Order any of the Klepto Cat Mysteries here: http://amzn.to/1kAI8I2 You can also order the print books from me here: http://www.matilijapress.com/Klepto-Cat-Mysteries.

This entry was posted in Cat Stories, Living With Cats, Uncategorized. Bookmark the permalink.