Thoughts for Thursday – When Your Cat Grieves 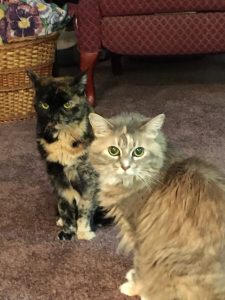 First, let’s establish whether or not an animal can grieve. Those of you who have had cats and other animals for any length of time—you know the answer. Absolutely animals feel and express emotion. You’ve seen your cat’s happy dance, her grumpy side, signs of frustration, fright, irritation, adoration—all of it. To know a cat is to know how deeply she loves and maybe that’s one of the most endearing things about a cat.

As you know—because I haven’t kept quiet about it—we lost our precious tabby-girl, Lily this year. Damn 2020!!! Damn kidney disease!! Left behind are two blubbering people who loved her dearly and our tortie, 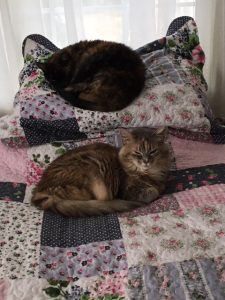 Sophie. Sophie was four when Lily came to live with us. She seemed to enjoy having a little sister to play with. It appeared to renew Sophie’s energy—give her a spark she’d lost when her senior pal, Winfield, crossed over the Rainbow Bridge. While Sophie and Lily did not become snuggle-buddies, they didn’t groom one another or sleep cuddled up together, I know now that there was a bond between them.

The ASPCA did a study some years ago to find out if cats mourn. They called it the ASPCA Companion Mourning Project. The results of that project might 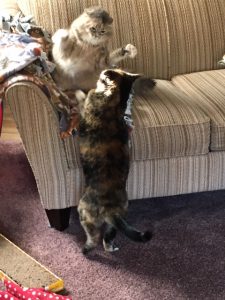 surprise some—others will nod knowingly. We certainly saw signs that Sophie was mourning when she realized Lily was not coming back. I believe that some of that knowingness came from us. Sophie sensed the shift in our emotions. And she responded. Anyone who has had cats for any length of time can tap into their cats’ sensitivities. We know our cats. They’re creatures of habit and when the behavior changes, you know that something has changed within them. Either the cat is happier and more contented because of a positive connection with another animal you’ve introduced or another person, perhaps. Or she is hurting because she’s ill or grieving. What are the signs of grieving in a cat?

According to the study:

42% of cats that had lost an animal companion ate less. 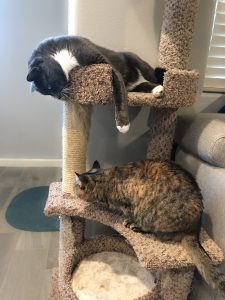 More than half of them in the study became more clingy with the humans in the household. They also often slept in different places.

We notice that Sophie is eating more actually. She definitely is more vocal. Generally twice every day 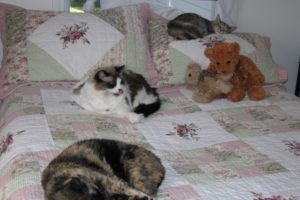 Sophie and Lily would run at breakneck speed up and down the hallway—Lily being chased in one direction and the chaser in the other direction. Now, at least twice a day Sophie walks through the halls calling as if for Lily. It’s sad and haunting. 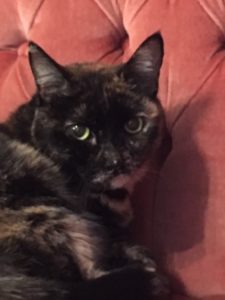 for food when it’s mealtime, checking in with me when I’m working in my office, and scratching on my favorite chair.

It’s recommended that you watch over the cat or cats left after one of their companions passes. Make sure she is eating and that she’s using the litter box as usual. Talk to her—let her know you’re still there for her and you understand her pain.

It is also recommended that you do not get a new cat right away.