Frivolous Friday – Saving Cats: It’s All in Your Perspective 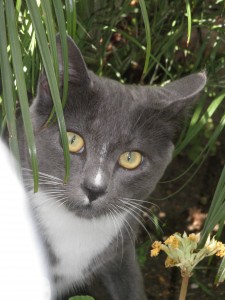 Smokey, AKA the Klepto Cat

A family member just returned from a Mediterranean cruise. She commented on how many cats she saw in Greece. She said they were wandering around the cities, hanging out in the shops and there were water bowls everywhere for them. Lovely, I thought. Quaint.

I did a little research and discovered that there are, indeed, a lot of free-range cats in Greek cities and it’s common for residents and store owners to feed them. How charming. Visitors are treated to the lovely sight of cats lolling among the ruins, scampering through the streets, greeting them in quaint shops, and peering out from around flower pots here and there. But evidently not all of the cats are healthy and safe as some portend. According to some, the cats of Greece are in danger every day. The lack of spay-neuter policies foster a constant influx if kittens and there are not enough people to care for all of them properly—with regular feedings, plenty of fresh water, and veterinary care. Because of this, to some in Greece, cats are vermin. As in any community where a species is abundant, many of these cats suffer abuse and neglect. Let me give you some perspective on this situation.

Who doesn’t love a ladybug? They’re pretty and interesting. There are even children’s 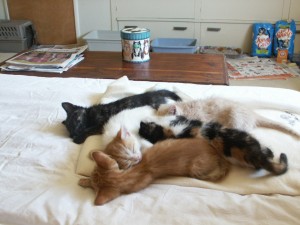 Kittens waiting for a home

stories and rhymes written about ladybugs. I’ve always liked ladybugs. I smile when I see one. If one lands on me, I study it and either allow it to ride along with me as I garden or I gently send it on its way. Ladybugs are just about the cutest bug around.

However, once I rode with a group on horseback to a place in our local foothills called Ladybug Camp. How thrilling it was to ride into this area and see ladybugs everywhere. It was a beautiful sight—so colorful. The ground, every log, tree stump, rock, shrub was shrouded in little red ladybugs. We dismounted and started moving around the place and I was careful not to step on any of the ladybugs. But, alas, it became impossible. I felt awful when I’d accidently squash one, but there were so many, it was impossible to keep from doing so.

By the time we were ready to eat our makeshift dinner meal, most of us were “over” the ladybugs. We were being repeatedly bit. You couldn’t sit down without ladybugs crawling all over you and, yes, they bit. By the time we left the camp, any reverence we had for ladybugs was pretty well tainted because there were so many. They’d become a nuisance like a swarm of mosquitoes or flies, or an army of ants or a flock of seagulls or pigeons. A few of these creatures might be charming, but when there are hundreds of thousands of them, they become annoying pests.

Let’s hope that the powers-that-be in Greece figure this out soon and start a movement to preserve the beauty, grace, and wonder of the cat so that all cats in their country will have the opportunity for a healthy and safe life.

2 Responses to Frivolous Friday – Saving Cats: It’s All in Your Perspective