A Cat With a Big Heart 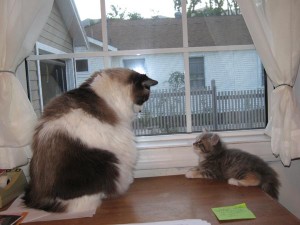 It has been a bit of a feline circus around here these past two weeks. Eight-week old Lily is a pure delight. We have so enjoyed having a kitten around again. That is, all of us except Max. We don’t know if she is the cause or not, but our 11-year old formerly feral kitty has been sick. And, from all that I read, it could be stress-related.

Lily came to us two weeks ago—she was supposed to be 8-weeks old. But the vet tells us that she was only 6-weeks and, before she would administer her inoculations, she wanted the kitten to grow and age a little more. Well, I thought she was awfully small, but it has been a while since I’ve been around a very young kitten. Why didn’t the owner know how old her kittens were? I guess because she had so many. She thought she had 13 kittens (from 3 mother cats), but actually found 2 more this week. She thought they were all born around mid March. But Lily’s litter, it seems didn’t arrive until around April 1.

Okay, so a few days after we brought Lily home, Max started vomiting and gagging. He went off his food and he began to drool and hang his tongue out. Of course, we took him to the vet. He spent a week getting examined, observed, poked, ex rayed and force-fed. Initially, the vet (and I) thought he had a hairball lodged somewhere. Ex rays proved us wrong. What the vet did find, however, was that Max had a very red throat and that he has an enlarged heart and some sort of kink in his esophagus. She wasn’t too concerned about his heart because she could not hear anything irregular through the stethoscope.

When Max didn’t seem to perk up, however, and when he still wasn’t eating on his own after almost a week, I went online. I discovered that stress can cause a cat with an enlarged heart to have symptoms such as Max had—even the red throat, from stomach acids coming up into the throat. And I found this tidbit—“sometimes it can be uncomfortable for a cat with an enlarged heart to lean down to eat, so they go off their food.”

That’s when we got the idea to elevate his food and water. We set his bowls up on a little stool, kept Max isolated (that meant he got to sleep on my bed all day and night) and the very next evening, he started eating and he has been eating his usual amount every day since—about 7 days.

He’s still not crazy about the kitten, but, as you can see in the photo, they have established their pecking order. She’s a bit of a tease and he’s a grumpy old man without much tolerance—they’re similar to Dennis the Menace and Mr. Wilson.

There is another cat in the household—the middle child. Sophie, 4, still has a lot of kitten in her and she and Lily romp and play like crazy around here. It is so much fun to watch them.

Is there anyone out there who has a cat with an enlarged heart? I guess it is rare that you would discover this unless there is an irregular heartbeat or an ex ray is called for. I’d like to hear your stories and your remedies. I’m a little concerned this morning as Max, who has been doing beautifully, lost his breakfast all over the carpet. I hope we aren’t back to square one with him.